So, today I would like to introduce you to the “BRO”, first ever attempt to create a Lithuanian coffee brewer.
When I bought it the guy who developed it, Emanuelis Ryklys said, “Take care of the Brother”. That sure forms some kind of attachment to this unique coffee dripper ?

I managed to get my "BRO" coffee dripper  during Vilnius Coffee Festival,  although it has been around for a while. But first, lets dig in for some facts. As it is developed by Lithuanian, it is one of the reasons why materials like wood and linen come into play, these materials are inseparable from Lithuania since ancient times. It looks kind of like Hario V60 but it also has a lot of difference. “BRO” is wooden, with no spiral ribs inside, the angle is different (I would say around 70-75 degrees), and the dripper itself is thick and it also comes with special double layered linen filter.  On the other hand V60 ceramic/plastic,  has spiral ribs inside, the shape is 60 degrees angle and  is bit thinner and is used with thin paper filter. So considering these differences the flavours in the final brew should be quite different also.

So without further ado, lets make some coffees ?

For fair comparison I used similar recipe for both V60 & BRO:

Outcome was different: it took about 20 seconds  less for BRO to brew, that’s probably why they suggest “sand like” coarseness for BRO,  and bit finer then for V60. Right after the brew, first thing that you can see is different is the colour of the coffee. The difference is not big, but the coffee brewed with BRO is a bit more “cloudy” which means that there is more particles in the coffee. 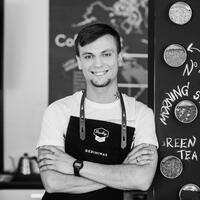