Latte vs. Flat White - What is the Difference?

Caffé Latte or just latte is an espresso based drink that consists of 1-2 espressos and lightly steamed milk. Traditionally it has been customary to serve it from a tall glass but nowadays it's more and more common to serve it from a bigger cup. Also the amount of espressos has developed during the years; the traditional latte has only one espresso and ~250ml glass but as during past years drink sizes have become a bit bigger it's common to find your your latte served in a 350ml cup and with two espressos.

One thing that is similar between latte and flat white but different in cappuccino is the amount of foam - latte and flat white should have less and cappuccino more. What is then less? It depends a lot what kind of cup/mug/glass the drink is served (glasses usually make foam amount appear bigger than in cups) but these amounts would be my "standards";

As the name states, caffe latte is coffee with milk (caffé = coffee, latte = milk) and drink is pretty milky and mild in coffee flavour. It's perfect for someone who is maybe starting their coffee drinking or someone who likes bigger and wants less coffee flavour in their drink. Latte is also really often the base for some flavoured espresso drinks such as caramel latte, cafe mocha or vanilla latte.

Flat white originates to Australia as almost all other espresso based drinks are originally from Italy. Flat whites are often served from a glass but it's also common to serve it in a small mug. The size of flat white should be around 200ml and it's always served with two espressos making it a bit stronger in coffee flavour compared to latte and cappuccino. As it's name states the amount of foam should be flat - so as little as possible (~1cm). Little foam and more espresso makes flat white the perfect drink for latte art and one is able to create a great contrast from the double espresso and lightly steamed milk.

Want to know how to pour latte art - check out our videos on different patterns!

I would recommend flat white for someone who is more used to the flavour of coffee and is looking for something a bit stronger. I personally prefer flat whites if I happen to order something with milk in a café. Give flat white a try!

Cappuccino gets its name from Capuchin monks, referring to the color of their capes reminding the color of cappuccinos surface. Cappuccinos are almost always served from a 150-200ml and with one espresso. What makes cappuccino different from latte and flat white is the amount of foam - it should double the amount 2-4cm layer on top of the drink. There has also been a 1-1-1 standard for cappuccino: 1 part espresso, 1 part warm milk, 1 part foam. But I think that standard has been outdated.

There is a funny "rule" about cappuccinos in Italy - one shouldn't order a cappuccino after 11am as cappuccinos are considered as breakfast drinks as they consists of a lot of milk and it's considered heavy.

Do you want to know more? Make sure to check out our Brew Guides to find out how to make caffé latte, cappuccino and flat white! 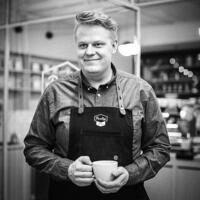