My Coffee Origin Trip to Kenya

From May to June, I took a journey from bean to cup in Kenya. I spent two weeks in Nyeri county and two weeks in Embu county. I had an opportunity to do all activities what is possible in coffee world – Meet with coffee farmers and their stories, help farmers on the field, pick berries, wash coffee, grade and sort coffee. What I saw, learned and experienced, you can see on my photos with descriptions.

The seeds should be kept moist in the nursery and mixed with manure. The seeds should then be allowed to germinate for a period of 2-3 months with a constant watering regime before transplanting into coffee pods. The nursery is usually 1 meter long and has 2 trenches 1 foot apart where the seeds are planted.

Adding compost to between coffee plants is an important activity. Because coffee plants are not located on a flat surface and compost between rows helps keep rain between plants, which is important for a nutrition. Otherwise the water would ’run’ down the slopes and therefore the coffee plant would not get enough water and nutrition value. Before the compost is added between the rows, it must stand for seven months and dry to prevent it from being too fresh for the coffee plant. The compost rows or trash lines are selected according the gradient of the land covered by coffee. So the compost has 2 advantages, it is both acts as a source of nutrients and prevents soil erosion. Compost was added after every third row.

With proper tissue management you will get flowering twice a year. In Kenya the first flowering is in mid-year (May-June) when it’s fly-crop. Second and main flowering is end of year (October-November) when it’s main crop.
Flowering is an indication that the nodes will produce a cherry. If a farmer prepares early by pruning and desuckering in December or January to maintain or get new branches then give proper nutrition in terms of fertilizer and manure, farmer will get good flowering in March which will mean a good harvest in May for early crop.

Pruning helps in maintaining good quality by removing excess branches. A primary branch should have 4-6 primaries. If they are more those extra primaries will feed on the nutrients given to the cherry and reduce quality. In the picture you can see a 96 years old coffee farmer, who is still working some days in the farm.

Only approx. 10% of the coffee farms in the world are fully organic.
From the pin heads around the leaves, it’s quite visible that the primary will bear a lot of cherries, however, chemicals may increase productivity. On the flip side excess chemicals may have residue and may even make the coffee taste phenolic (= really chemical taste). But the right amount of chemicals will increase productivity for the farmers and it will not have negative effect on the flavour the coffee.

Harvesting season in Kenya is twice a year. Main harvest is in the end of year – November and December. Fly Crop is in May and June. Average is 30-40 pickers per hectare. They start their day and picking 8:00 and finish 17:00. Average is 40-50 kg berries per picker. In the farms that I visited, the pickers had lunch together and the lunch was provided by the farm. Usual lunch on the coffee farm is traditional Kenyan meal of maize and beans, called Githeri and cup of black tea with milk.

After selection, the next step is pulping. The skin of the cherry and some of the pulp is removed by pressing the fruit by a machine in water through a screen. The bean will still have a significant amount of the pulp on it that needs to be removed. Removed pulp is placed back in the plantation as fertilizer.

After pulping, the beans are separated by weight as they pass through the water channels. The lighter beans float to the top, while the heavier beans sink to the bottom. Lighter means usually lower quality and heavier better quality. The water channel is used for both, grading and the final washing in the process. For the final wash a squeegee is used to wash the parchment against the water flow to ensure all parchment is well washed.

Sorting is important during the drying process of the coffee beans on African beds to remove any visible defects such as stinkers, unripes (stinkers and unripes end up as quakers when roasted), insect damaged and foreign objects such as husks and cherry pods. Sorting increases the cleanliness of the coffee which leads to a better cupping score and better pay for the farmer.

Special thanks for the coffee farmer David from Nyeri, who helped me to draft this text. And also Njue from Embu, they both were my mentors and helped me understand and teach what is happening on the farm and field. 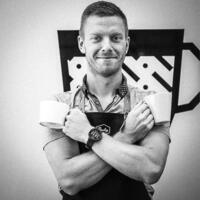 When I don’t do my job and share my skills and knowledge with our clients, I like to watch good movies, travel to new destinations and get know to different cultures for food, coffee and people.

Recommended for you
Popular right now